No, they’re not a bunch of pop musicians or a band of karaoke singers but furry, fuzzy, cute beagle puppies! Coming from the same litter, both Chatur and Carlos have made their way into our hearts and office recently and are making everyone fall in love with them. And what’s interesting is that their mother is named Poison (for a reason ) and we hope that this time around the children don’t take after their mother. So far so cute!

From running after them and saving the server wires from being eaten away, the cubies are doing all in their power to make them feel and behave like at home instead of them making the office their playground. But you can only do so much when the ‘idiomatic’ puppy face is multiplied two times and accompanied by an overload of tumbling acts and puppy tricks.

Ready to meet them? Here’s a trivia that will come in handy on the day of encounter. 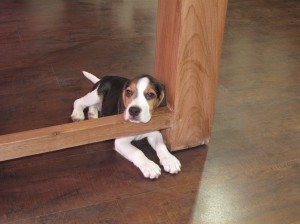 Chatur – is two months old and loves to play
Likes – Mud, toys, biting on things, creating chaos and playing with his brother too

Dislikes – Interruptions during play-time, being confined to a room or someone’s lap
Eats – Mud (as implied in ‘Likes’), and dog food

Carlos – is also two months old and takes the Latino name way too seriously for his image and so is quieter than his brother
Likes – Mud too (common ground between the two or may be genes), only likes to play with his brother. Follows when you don’t pay attention.
Dislikes – His brother hogging the limelight and his bullying but he is usually fine with most other things.

But these traits will change and interchange just as we do their identities sometimes.

And of course they don’t bite, because they don’t have teeth as of now but we’ll make sure that it does not happen even when they do have teeth, only for the inner tribe for the rest we’ll see!

While we enjoy the ‘Doggy-see-Doogy-do’ you keep tuning in for more updates on the woofy moments at CueBlocks!