Amongst all the Social Media bigwigs, Twitter was the last one to jump onto the advertising platform. With 200 million monthly active users on twitter, and 175 million tweets a day, the outreach of twitter ads is huge.

With the viral marketing that twitter offers, it is a great advertising platform.  If used wisely, brands can gain a lot of momentum in terms of visibility.
There are some great examples where twitter ads have been used effectively. The most recent and talked about being the Oreo Ad during the Super Bowl Blackout (Yes, the very same). Oreo’s marketing team capitalized on a big & viral social media moment. That tweet gained over 16,000 re-tweets, with the entire twitter userbase talking & tweeting about Oreo. That is what twitter advertising can do for you.

Apart from the ability to tap on to live, real-time conversations happening around the world, twitter also has high user engagement rates. Brand engagement on twitter is the best amongst all the social networks. Let’s take a look at few stats, reiterating the same.

That’s the influence of Twitter on its users, that the micro-blogging site has become a real time interactive space for many. Combine that with twitter ads and you have a winner!

Advertisers can use this option to get more followers on twitter, and also get more people to talk about their account. In simple words, you can use this ad type to buy twitter followers, legally.

Promoted accounts are shown to users who are most likely to be interested in your account. They appear:

Promoted Accounts on the left side of the home page: 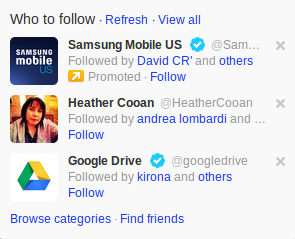 Promoted Accounts in the Who to Follow Tab on the #Discover Page: 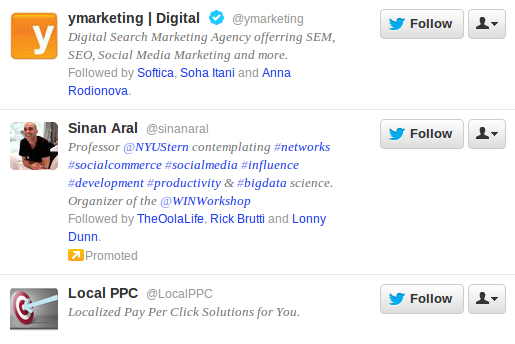 The Promoted Accounts model works on a Cost-per-Follower (CPF) basis, with a minimum CPF of $0.50. This means that you will be charged only when someone follows your promoted account, and you can determine what you would want to pay for the same. You will only be charged for new followers. Win-Win all the way.

Promoted tweets are tweets that are paid for by an advertiser to appear to a larger, targeted audience. They appear:

Promoted tweets in the timeline

Promoted tweets in the Search Results:

The search term “Blackberry” shows a promoted tweet by Accenture. 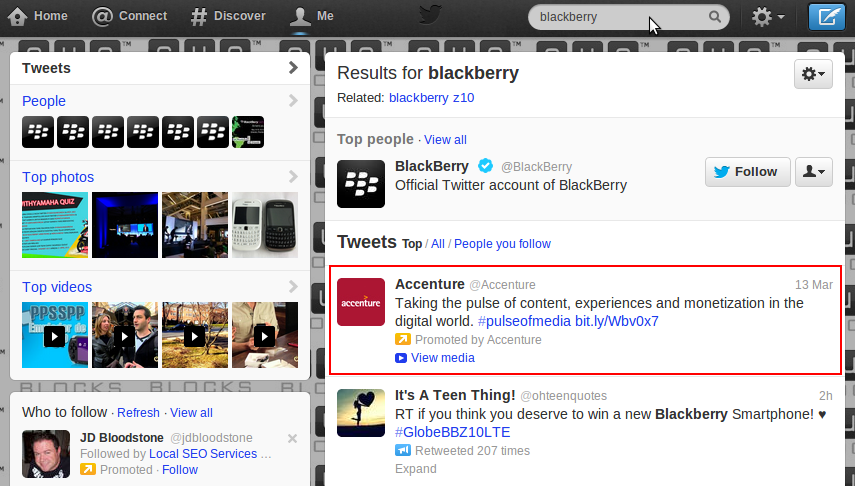 Advertisers can also target users with specific mobile devices or across different platforms such as Android, Blackberry, iOS etc.

Currently, Promoted tweets are in beta, available only to a small selection of advertisers. If you’re interested, you can sign up here. Twitter will notify you as and when they are rolled out publicly. This ad type works on a Cost-per-Engagement (CPE) basis, so an advertiser only pays when someone engages (takes an action) with the promoted tweet, i.e. re-tweets, replies to, clicks on or favorites it.

Promoted tweets greatly increase the outreach of an advertiser by making sure that their tweet stays on top of the search results and does not get lost within other tweets.
Ideal for creating an involved fanbase on twitter, advertisers can also use promoted tweets to give prominence to upcoming events, new launches or special offers. 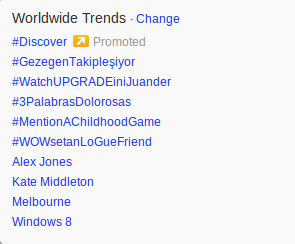 Twitter trends reflect the conversations/ tweets happening on twitter, as they happen, in real time. Using Promoted Trends, an advertiser can gain the top spot on these trending topics. A promoted trend usually lasts for 10 – 24 hours. You can also pre-book a promoted trend to capitalize on upcoming occasions.

Promoted trends are also currently in beta, and is available for major partners of twitter. Their price is not officially disclosed but are said to be priced at $200,000 per day.

You can get millions of twitter users talking about your trend. Make your brand a part of the conversations being hosted around twitter. Unlike normal trends, which change quite often, promoted trends stay on their spot for the specified time, which can vary according to the needs of the advertiser. In simple words, using promoted trends, your brand will become a part of the viral conversations hosted each day on twitter, worldwide. Since promoted trends are visible to each twitter user, you are actively reaching the entire twitter userbase, all across the world, at one time.

From there on, you can select the type of ad you want to use. Unfortunately, there are not many options available in the twitter ads self service as of now.

It is also important to note that, while twitter advertising will help you gain new followers, and put your brand out there in front of the users, you must keep your followers engaged even after your ad campaign is over. This is crucial for your advertising efforts to gain the desired results.

Advertising on twitter has not really caught on yet, but with constant changes being made, twitter advertising quite has the scope. Advertisers can really benefit from being a part of the real-time, viral conversations being held on twitter each minute of the day.